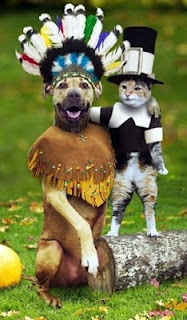 As you and your family prepare to gather around the table this Thursday, don't forget to keep an eye on your animal friends.  Even the best-behaved dogs can forget their manners when their noses are in over-drive!

Check out these tips to keep your pets safe around your your Thanksgiving feast, and these tips to help make sure all humans and canines can peacefully coexist throughout the day.


Posted by Stephanie Colman at 2:11 PM No comments:

Halloween night as a training opportunity for your dog.

Halloween is coming, and if the consistent doorbell ringing turns your dog into a Raging Barkasarus, this training tip can help!  With a little strategic pre-planning, you can turn Halloween into a great training opportunity for both kids and your dog.

Click to watch "Trick or Treat and Train Your Dog!"

There's also a written version of this training technique, here.

AND - if you'd like your dog to wear a costume, check out these tips on teaching him to not just tolerate but like wearing his Hairy Pawter get-up!

Written version of wear-a-costume training technique is available, here.  Note: I describe draping the costume over your dog and feeding for 10 seconds, but this assumes your dog is comfortable with the approach of the costume.  If you dog begins to shy away, start MUCH smaller.  For example, hold the costume in one hand and feed a treat with the other.  Repeat 10 times.  Then reach toward the dog with the costume, but don't touch him with it, and then feed a treat.  Repeat 10 times.  You get the idea, right?  Break it down into steps that are so small and simple, it doesn't even dawn on your dog to worry about the costume in your hand.

Happy Howloween!
Posted by Stephanie Colman at 12:13 AM No comments:

I've recently taken up the art of learning American Sign Language.  It's something I've always been interested in, and I've tried to learn twice before, but lacked easy access to people with whom I could practice.  Now I have at least two friends who sign, and I'm paying for school anyway (getting my graduate degree), so I figured, why not?

I really like the instructor.  She's very personable and extremely expressive, which makes understanding her signs much, much easier.  What I've come to realize, though, is that everyone signs things just a little bit differently.  Even when using the same gesture, two people can employ subtle differences in precisely how they bend/twist/shape their hands.  I think of them as visual accents.

What's interesting - and the tie-in to dog training - is realizing just how dependent I am on the instructor's specific "accent."  I find that I sometimes struggle to understand other signers when they layer their own "accent" onto a sign.  ToMAYto, toMAHto?  Yes - but not when you're first learning.

Think of your dog during an obedience class.  You think he "knows" sit (or whatever behavior you're working on) because you do it all the time.  But when you practice, you generally have the habit of standing directly in front of your dog.  Your body's "accent" is to be in front of the dog, and he is keenly aware of this.  Later, when he's standing in proper heel position at your left side, and you ask him to sit, you've changed your body's "accent" and he's likely to struggle with the "sit" behavior.

Of course, the more you practice having your dog sit - in lots of different positions relative to you - the quicker he'll generalize the behavior (that "sit" means "butt-on-floor" no matter where he is in relation to you).  Eventually, he'll become fluent at sitting - meaning it will happen anywhere, any time and it's never confused with a different cue.

For me, the more people with whom I practice signing, the sooner I'll begin to fully generalize the hand shapes and won't be as thrown by subtle visual differences. I don't know that I'll ever become truly fluent, but much like when training a dog, you don't know what you're truly capable of until you try!
Posted by Stephanie Colman at 4:55 PM 1 comment:

I tweeted this pic of my dogs a few minutes ago:


Watching my dogs lie calmly behind the gate reminded me of what a great skill this is.  Yes, I could've crated them, but my apartment is small so I only keep one crate set up, and using the gate gives them the freedom to mill around in the hallway, bathroom and bedroom.  That's got to be more interesting than sitting in a crate.

Taking the time to teach various life skills (such as the ability to be confined) really helps make life less stressful for everyone.  When it comes to confinement, I think it's good to have options.  If you've already crate trained your dog, look around at where else you might be able to create dog-safe zones that provide a bit more space, or at the very least, an alternative to crating.

Keep Your Dog Safe in the Water During the Dog Days of Summer! 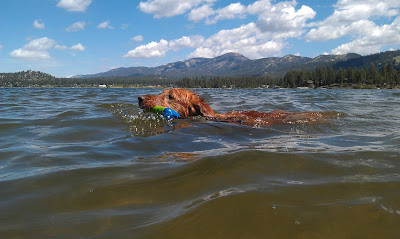 Safe Swimming for Dogs!
The kind, dog-loving folks over at Whole Dog Journal were nice enough to offer my recent feature on water safety for dogs as a full access article - no subscription needed!  (Click "Safe Swimming for Dogs!" to be directed to the article.)  As you and your dogs try and stay cool during the Dog Days of Summer, be sure to stay safe!  AND, if you're in the Los Angeles area, and would like some help getting your dog used to the water or to perfect his paddle technique, I can help with that!

P.S. The pic is my dog, Quiz.  We recently spent a few days in Big Bear Lake.  It's a dog's paradise up there... hiking AND water play, all right outside your cabin door!
Posted by Stephanie Colman at 10:56 AM No comments:

Traveling without your dog this summer?  Consider these tips when deciding how best to care for your dog while you're away.

Home Away From Home

Posted by Stephanie Colman at 10:44 AM

Keep Your Dogs Safe on July 4! 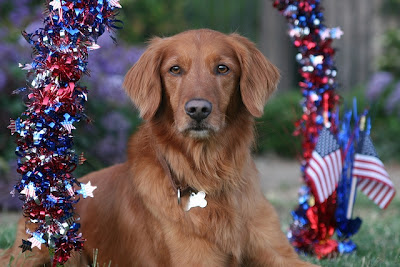 Click here for my article on Fourth of July safety for dogs.
Lots of great tips to help dogs who are afraid of fireworks.
Posted by Stephanie Colman at 5:01 PM No comments:

As you enjoy the summer months with your friends, family and pets, don't forget to keep your dogs safe around the backyard pool.

Dogs, just like kids, benefit from swimming lessons!  The goal of a dog swim safety lesson is to teach him the safe way to enter and exit the pool - whether or not he likes the water.  Even accomplished swimmers can drown when they unsuccessfully try to climb out at the side of the pool instead of at a set of steps.

Following is a pool training segment I shot in partnership with J9's K9s Dog Training:

Posted by Stephanie Colman at 3:41 PM